Last week I was looking at the top viewed posts on my blog and I noticed that visitors are interested in the authentication part of ASP.NET Web API, CORS Support, and how to authenticate users in single page applications built with AngularJS using token based approach.

So I decided to compile mini tutorial of five posts which covers and connects those topics. In this tutorial we’ll build SPA using AngularJS for the front-end, and ASP.NET Web API 2, Owin middleware, and ASP.NET Identity for the back-end.

The demo application can be accessed on (http://ngAuthenticationWeb.azurewebsites.net). The back-end API can be accessed on (http://ngAuthenticationAPI.azurewebsites.net/) and both are hosted on Microsoft Azure, for learning purposes feel free to integrate and play with the back-end API with your front-end application. The API supports CORS and accepts HTTP calls from any origin. You can check the source code for this tutorial on Github. 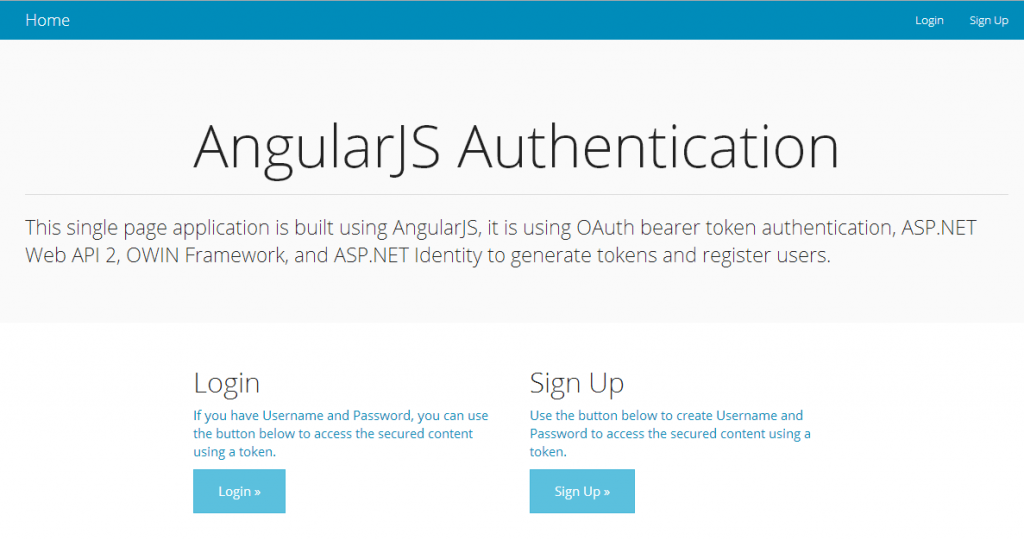 With the evolution of front-end frameworks and the huge change on how we build web applications nowadays the preferred approach to authenticate users is to use signed token as this token sent to the server with each request, some of the benefits for using this approach are:

The front-end SPA will be built using HTML5, AngularJS, and Twitter Bootstrap. The back-end server will be built using ASP.NET Web API 2 on top of Owin middleware not directly on top of ASP.NET; the reason for doing so that we’ll configure the server to issue OAuth bearer token authentication using Owin middleware too, so setting up everything on the same pipeline is better approach. In addition to this we’ll use ASP.NET Identity system which is built on top of Owin middleware and we’ll use it to register new users and validate their credentials before generating the tokens.

As I mentioned before our back-end API should accept request coming from any origin, not only our front-end, so we’ll be enabling CORS (Cross Origin Resource Sharing) in Web API as well for the OAuth bearer token provider.

Use cases which will be covered in this application:

Enough theories let’s get our hands dirty and start implementing the API! 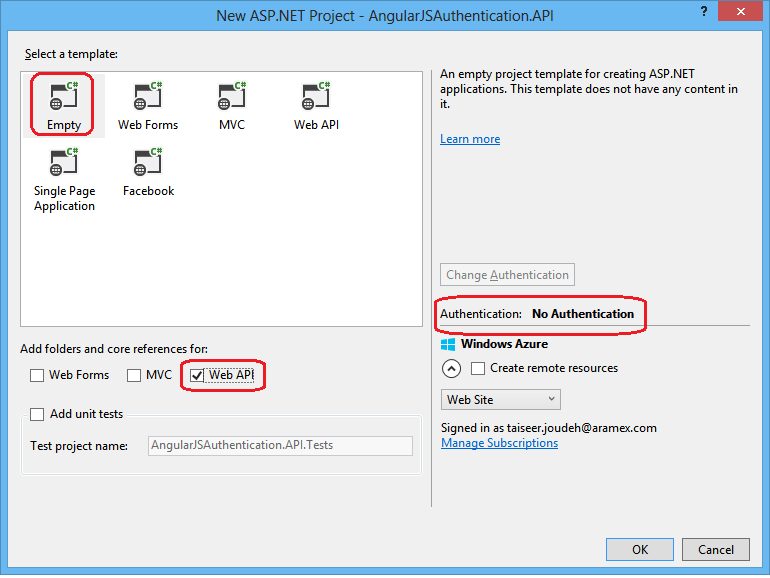 Now we need to install the NuGet packages which are needed to setup our Owin server and configure ASP.NET Web API to be hosted within an Owin server, so open NuGet Package Manger Console and type the below:

The  package “Microsoft.Owin.Host.SystemWeb” is used to enable our Owin server to run our API on IIS using ASP.NET request pipeline as eventually we’ll host this API on Microsoft Azure Websites which uses IIS.

Right click on your project then add new class named “Startup”. We’ll visit this class many times and modify it, for now it will contain the code below:

What we’ve implemented above is simple, this class will be fired once our server starts, notice the “assembly” attribute which states which class to fire on start-up. The “Configuration” method accepts parameter of type “IAppBuilder” this parameter will be supplied by the host at run-time. This “app” parameter is an interface which will be used to compose the application for our Owin server.

The “HttpConfiguration” object is used to configure API routes, so we’ll pass this object to method “Register” in “WebApiConfig” class.

Lastly, we’ll pass the “config” object to the extension method “UseWebApi” which will be responsible to wire up ASP.NET Web API to our Owin server pipeline.

Usually the class “WebApiConfig” exists with the templates we’ve selected, if it doesn’t exist then add it under the folder “App_Start”. Below is the code inside it:

No need to use this class and fire up the Application_Start event after we’ve configured our “Startup” class so feel free to delete it.

After we’ve configured the Web API, it is time to add the needed NuGet packages to add support for registering and validating user credentials, so open package manager console and add the below NuGet packages:

Now we need to add Database context class which will be responsible to communicate with our database, so add new class and name it “AuthContext” then paste the code snippet below:

As you can see this class inherits from “IdentityDbContext” class, you can think about this class as special version of the traditional “DbContext” Class, it will provide all of the Entity Framework code-first mapping and DbSet properties needed to manage the identity tables in SQL Server. You can read more about this class on Scott Allen Blog.

Now we want to add “UserModel” which contains the properties needed to be sent once we register a user, this model is POCO class with some data annotations attributes used for the sake of validating the registration payload request. So under “Models” folder add new class named “UserModel” and paste the code below:

Now we need to add new connection string named “AuthContext” in our Web.Config class, so open you web.config and add the below section:

Now we want to implement two methods needed in our application which they are: “RegisterUser” and “FindUser”, so add new class named “AuthRepository” and paste the code snippet below:

What we’ve implemented above is the following: we are depending on the “UserManager” that provides the domain logic for working with user information. The “UserManager” knows when to hash a password, how and when to validate a user, and how to manage claims. You can read more about ASP.NET Identity System.

Now it is the time to add our first Web API controller which will be used to register new users, so under file “Controllers” add Empty Web API 2 Controller named “AccountController” and paste the code below:

By looking at the “Register” method you will notice that we’ve configured the endpoint for this method to be “/api/account/register” so any user wants to register into our system must issue HTTP POST request to this URI and the pay load for this request will contain the JSON object as below:

Now you can run your application and issue HTTP POST request to your local URI: “http://localhost:port/api/account/register” or you can try the published API using this end point: http://ngauthenticationapi.azurewebsites.net/api/account/register if all went fine you will receive HTTP status code 200 and the database specified in connection string will be created automatically and the user will be inserted into table “dbo.AspNetUsers”.

Note: It is very important to send this POST request over HTTPS so the sensitive information get encrypted between the client and the server.

The “GetErrorResult” method is just a helper method which is used to validate the “UserModel” and return the correct HTTP status code if the input data is invalid.

Now we want to add another controller to serve our Orders, we’ll assume that this controller will return orders only for Authenticated users, to keep things simple we’ll return static data. So add new controller named “OrdersController” under “Controllers” folder and paste the code below:

Notice how we added the “Authorize” attribute on the method “Get” so if you tried to issue HTTP GET request to the end point “http://localhost:port/api/orders” you will receive HTTP status code 401 unauthorized because the request you send till this moment doesn’t contain valid authorization header. You can check this using this end point: http://ngauthenticationapi.azurewebsites.net/api/orders

Till this moment we didn’t configure our API to use OAuth authentication workflow, to do so open package manager console and install the following NuGet package:

After you install this package open file “Startup” again and call the new method named “ConfigureOAuth” as the first line inside the method “Configuration”, the implemntation for this method as below:

Now we passed this options to the extension method “UseOAuthAuthorizationServer” so we’ll add the authentication middleware to the pipeline.

As you notice this class inherits from class “OAuthAuthorizationServerProvider”, we’ve overridden two methods “ValidateClientAuthentication” and “GrantResourceOwnerCredentials”. The first method is responsible for validating the “Client”, in our case we have only one client so we’ll always return that its validated successfully.

If the credentials are valid we’ll create “ClaimsIdentity” class and pass the authentication type to it, in our case “bearer token”, then we’ll add two claims (“sub”,”role”) and those will be included in the signed token. You can add different claims here but the token size will increase for sure.

Now generating the token happens behind the scenes when we call “context.Validated(identity)”.

First of all we need to install the following NuGet package manger, so open package manager console and type:

Now open class “Startup” again and add the highlighted line of code (line 8) to the method “Configuration” as the below:

Assuming that you registered the username “Taiseer” with password “SuperPass” in the step below, we’ll use the same username to generate token, so to test this out open your favorite REST client application in order to issue HTTP requests to generate token for user “Taiseer”. For me I’ll be using PostMan.

Now we’ll issue a POST request to the endpoint http://ngauthenticationapi.azurewebsites.net/token the request will be as the image below: 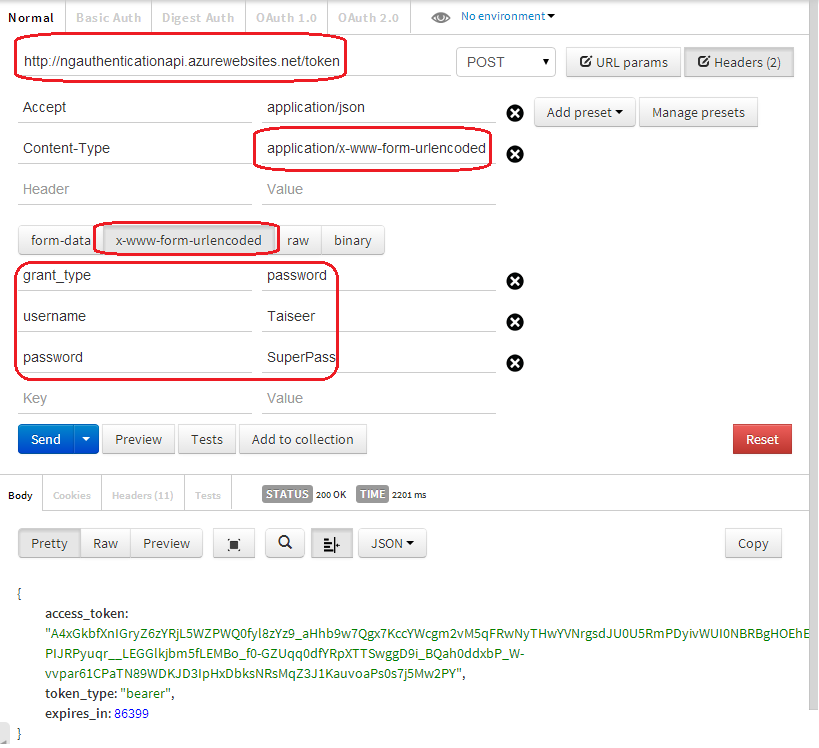 Notice that the content-type and payload type is “x-www-form-urlencoded” so the payload body will be on form (grant_type=password&username=”Taiseer”&password=”SuperPass”). If all is correct you’ll notice that we’ve received signed token on the response.

As well the “grant_type” Indicates the type of grant being presented in exchange for an access token, in our case it is password.

Note: that we are not transferring the username/password as the case of Basic authentication.

The GET request will be as the image below: 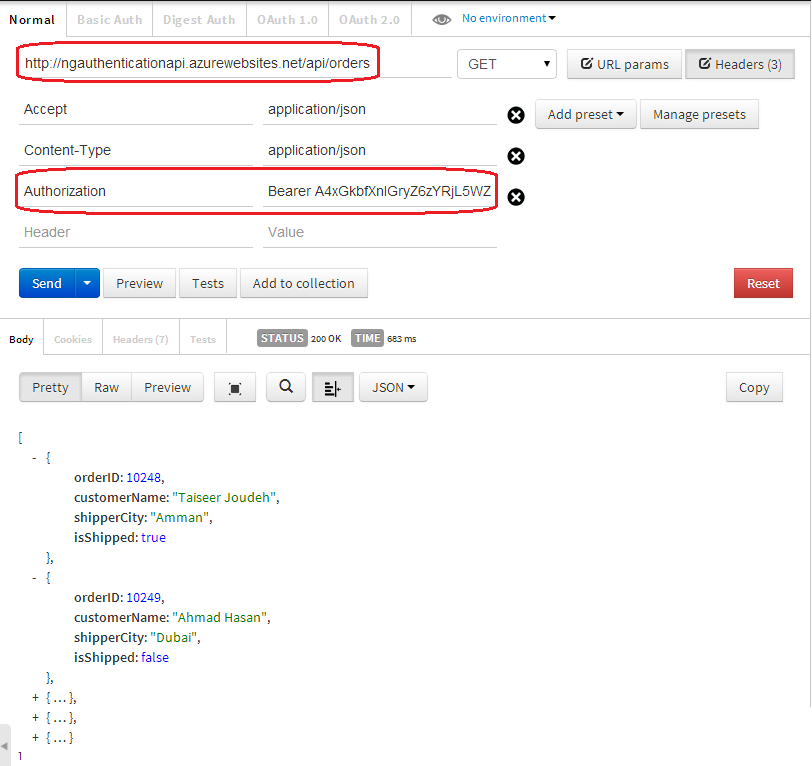 Now our back-end API is ready to be consumed from any front end application or native mobile app.

Update (2014-08-11) Thanks for Attila Hajdrik for forking my repo and updating it to use MongoDb instead of Entity Framework, you can check it here.

You can check the demo application, play with the back-end API for learning purposes (http://ngauthenticationapi.azurewebsites.net), and check the source code on Github.