This is the forth part of Building Simple Membership system using ASP.NET Identity 2.1, ASP.NET Web API 2.2 and AngularJS. The topics we’ll cover are:

In the previous post we saw how we can authenticate individual users using the [Authorize] attribute in a very basic form, but there is some limitation with the previous approach where any authenticated user can perform sensitive actions such as deleting any user in the system, getting list of all users in the system, etc… where those actions should be executed only by subset of users with higher privileges (Admins only). 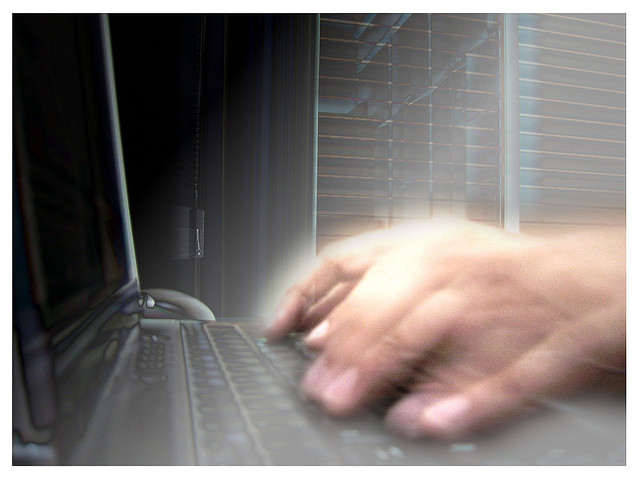 In this post we’ll see how we can enhance the authorization mechanism to give finer grained control over how users can execute actions based on role membership, and how those roles will help us in differentiate between authenticated users.

The nice thing here that ASP.NET Identity 2.1 provides support for managing Roles (create, delete, update, assign users to a role, remove users from role, etc…) by using the RoleManager<T> class, so let’s get started by adding support for roles management in our Web API.

The Role Manager class will be responsible to manage instances of the Roles class, the class will derive from “RoleManager<T>”  where T will represent our “IdentityRole” class, once it derives from the “IdentityRole” class a set of methods will be available, those methods will facilitate managing roles in our Identity system, some of the exposed methods we’ll use from the “RoleManager” during this tutorial are:

Now to implement the “RoleManager” class, add new file named “ApplicationRoleManager” under folder “Infrastructure” and paste the code below:

Notice how the “Create” method will use the Owin middleware to create instances for each request where
Identity data is accessed, this will help us to hide the details of how role data is stored throughout the
application.

Now we want to add a single instance of the Role Manager class to each request using the Owin context, to do so open file “Startup” and paste the code below inside method “ConfigureOAuthTokenGeneration”:

Now we’ll add the controller which will be responsible to manage roles in the system (add new roles, delete existing ones, getting single role by id, etc…), but this controller should only be accessed by users in “Admin” role because it doesn’t make sense to allow any authenticated user to delete or create roles in the system, so we will see how we will use the [Authorize] attribute along with the Roles to control this.

What we have implemented in this lengthy controller code is the following:

Now we’ll add the models used in the previous step, the first class to add will be named “RoleBindingModels” under folder “Models”, so add this file and paste the code below:

Now we’ll adjust the “ModelFactory” class to include the method which returns the response of type “RoleReturnModel”, so open file “ModelFactory” and paste the code below:

Until now the system doesn’t have an endpoint which allow users in Admin role to manage the roles for a selected user, this endpoint will be needed in the AngularJS app,  in order to add it open “AccountsController” class and paste the code below:

What we have implemented in this method is the following:

Now we’ll visit all the end points we have created earlier in the previous posts and mainly in “AccountsController” class. We’ll add add “Roles=Admin” to the Authorize attribute for all the end points the should be accessed only by users in Admin role.

The end points are:

– GetUsers, GetUser, GetUserByName, and DeleteUser  should be accessed by users enrolled in “Admin” role. The code change will be as simple as the below:

Last change we need to do here before testing the changes, is to create a default user and assign it to Admin role when the application runs for the first time. To implement this we need to introduce a change to the file “Configuration” under folder “Infrastructure”, so open the files and paste the code below:

What we have implemented here is simple, we created a default user named “SuperPowerUser”, then created there roles in the system (SuperAdmin, Admin, and User), then we assigned this user to two roles (SuperAdmin, Admin).

In order to fire the “Seed()” method, we have to drop the exiting database, then from package manager console you type  update-database which will create the database on our SQL server based on the connection string we specified earlier and runs the code inside the seed method and creates the user and roles in the system.

Now the code is ready to be tested, first thing to do is to obtain a JWT token for the user “SuperPowerUser”, after you obtain this JWT and if you try to decode it using JWT.io you will notice that this token contains claim of type “Role” as the below:

Those claims will allow this user to access any endpoint attribute with [Authorize] attribute and locked for users in Roles (Admin or SuperAdmin).

To test this out we’ll create new role named “Supervisor” by issuing HTTP Post to the endpoint (/api/roles/create), and as we stated before this endpoint should be accessed by users in “Admin” role, so we will pass the JWT token in the Authorization header using Bearer scheme as usual, the request will be as the image below: 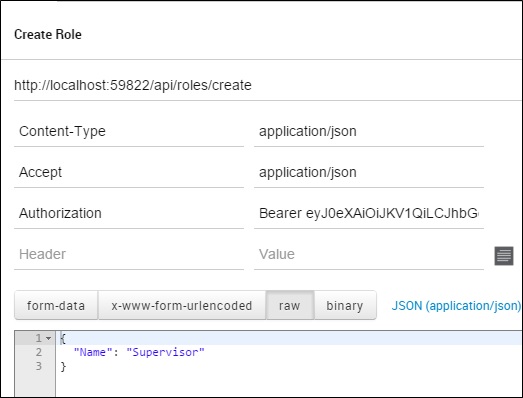 If all is valid we’ll revive HTTP status 201 Created.