This is the third part of Building Microservice Applications with Azure Container Apps and Dapr. The topics we’ll cover are:

In this post, we will add a new microservice named “ACA WebApp-Frontend” as illustrated in the architecture diagram.

Now we will add a new ASP.NET Core Web App project named “TasksTracker.WebPortal.Frontend.Ui”, Configuration will be as the image below, check “Enable Docker” as we are going to containerize the application and deploy it to ACR, make sure “Linux” is selected for the Docker OS setting. 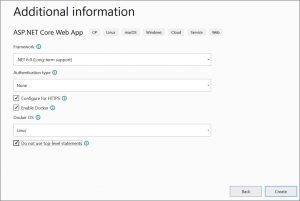 Next, we will add 3 pages responsible for listing all the tasks, creating a new task, and updating existing tasks.

So add a new empty Razor Page named “Index.cshtml” under the “Tasks” folder and copy the cshtml content from this link.

By looking at the cshtml content notice that the page is expecting a query string named “createdBy” which will be used to group tasks for application users, this technique is subject to change once we enable Authentication in future posts, we will get the user email from the claims identity of the authenticated users.

What we have done is straightforward, we’ve injected named HttpClientFactory which is responsible to call the Backend API service as HTTP request. The index page supports deleting and marking tasks as completed along with listing tasks for certain users based on the “createdBy” property stored in a cookie named “TasksCreatedByCookie”, more about we are filling this property later in the post.

Now we will add a new Razor page named “Create.cshtml” under the “Tasks” folder and copy the cshtml content from this link.

The code is self-explanatory here, we just injected the type HttpClientFactory in order to issue a POST request and create a new task.

Lastly, we will add a new Razor page named “Edit.cshtml” under the “Tasks” folder and copy the cshtml content from this link.

The code added is similar to the create operation, the Edit page accepts the TaskId as a Guid, loads the task, then updates the task by sending HTTP PUT operation.

Now we will register the HttpClientFactory named “BackEndApiExternal” to make it available for injection in controllers, so open file “Program.cs” and paste the code below:

Lastly, we will update the page “Index.html” to capture the email of the tasks owner user and assign this email to a cookie named “TasksCreatedByCookie”, Navigate to the page named “Pages\Index.csthml” and replace the HTML with the one in this link, then update code behind of “Index.csthml.cs” by pasting the code below:

In case you didn’t check the “Enable Docker” checkbox when creating the project we need to add a Dockerfile to the Web App project, so ensure you are on the root of the project and add file named “Docekrfile” and paste the code below:

With this last bit of code added to the Frontend Web App, you can run the Web app locally and try the different tasks management operations, if all is working fine you should be able to list all tasks created under the email you provided, update them, delete them, and mark them as completed. The web App will look similar to the below image 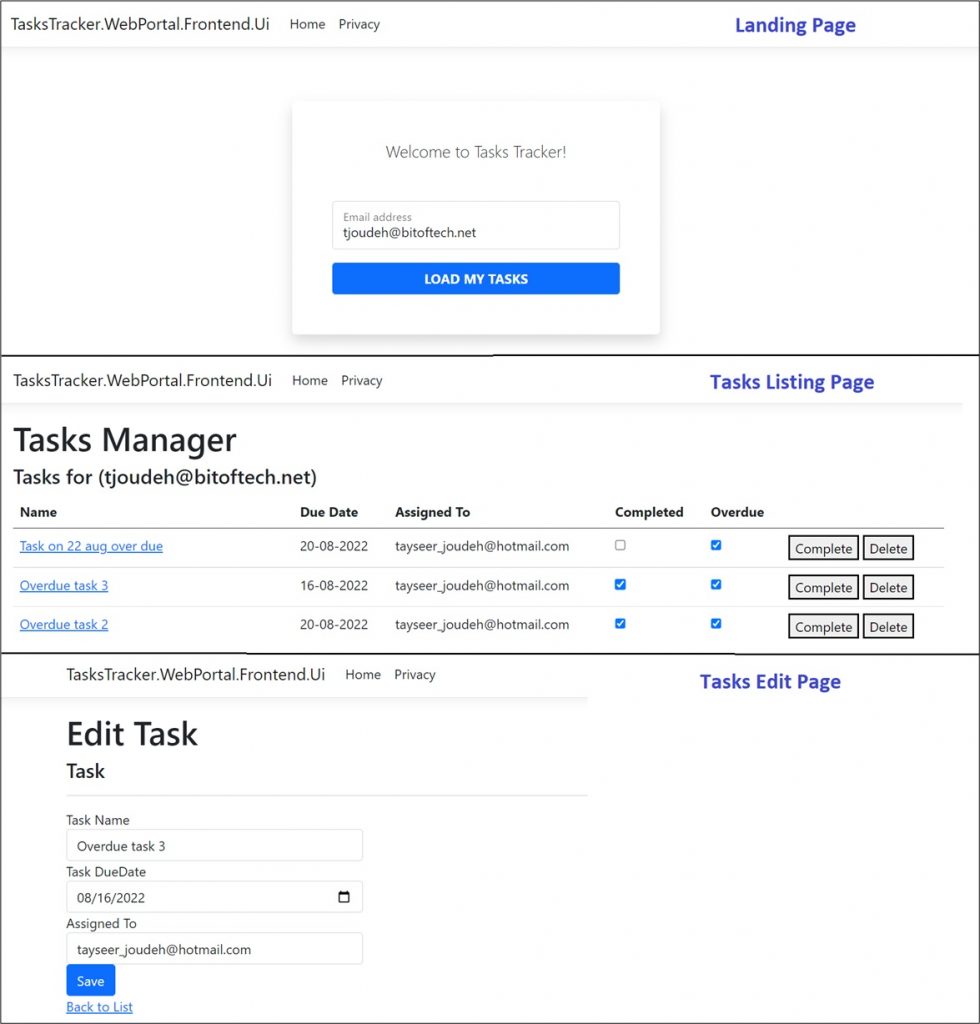 I will assume that you still have the same PowerShell console session opened from the last post, we need to add the below PS variables:

Now we will build the Web App project on ACR and push the docker image to ACR. Use the below command to initiate the image build and push process using ACR. The “.” at the end of the command represents the docker build context, in our case, we need to be on the parent directory which hosts the .csproject.

Once this step is completed you can verify the results by going to the Azure portal and checking that a new repository named “tasksmanager/tasksmanager-frontend-webapp” has been created and there is a new docker image with a “latest” tag is created, it should look like the below 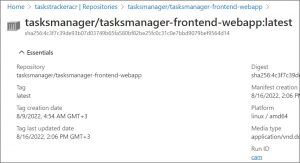 Now we will create and deploy the Web App to Azure Container App following the below command:

Notice how we used the property “env-vars” to set the value of the environment variable named “BackendApiConfig_BaseUrlExternalHttp” which we added in the AppSettings.json file. You can set multiple environment variables at the same time by using a space between each variable

The ‘ingress’ property is set to external as the Web frontend App will be exposed to the public internet for users.

Now copy the FQDN (Application URL) of the Azure container app named “tasksmanager-frontend-webapp” and open it in your browser and you should be able to browse the frontend web app and manage your tasks.

So far the Frontend App is sending HTTP requests to publically exposed Web API, any REST client can invoke this API, we need to change the Web API ingress settings and make it only accessible for applications deployed within our Azure Container Environment only, any application outside the Azure Container Environment will not be able to access the Web API. You can check the ingress settings of the Backend API from the Azure portal, it will look like the below image

To change the settings of the Backend API, fire the below CLI command

After you run this command you can check ingress settings in Portal and “Limited to Container Apps Environment” will be selected.

When you do this change, the FQDN (Application URL) will change and it will be similar to the below, notice how there is an “Internal” part of the URL.

If you try to invoke the URL from the browser directly it will return 404 as this Internal Url can only be accessed from container apps within the container environment.

The FQDN consists of multiple parts, for example, all our Container Apps we are going to create will be under the Environment unique identifier “agreeablestone-8c14c04c” and the Container App will vary based on the name provided, check the image below for a better explanation.

The last thing we need to do here is to update the Frontend WebApp environment variable named “BackendApiConfig_BaseUrlExternalHttp” with the new value of the internal Backend Web API base URL, to do so we need to update the Web App container app and it will create a new revision implicitly (More about revisions in the upcoming posts) to do so, execute the below command:

In the next post, we will start integrating Dapr and use the service to service Building block for services discovery and invocation.