In the previous post, we have seen how two Azure Container Apps can communicate with each other synchronously without and with Dapr using service-to-service invocation and services discovery using HTTP protocol.

In this post, I will cover how 2 services deployed to Azure Container Apps communicate synchronously over gRPC without using Dapr and then we will Daperize the 2 services and utilize the service-to-service invocation features coming with Dapr.

The scenarios I’ll cover are the following:

The scenarios depend on each other, so if you are interested in scenario 3 for example please consider looking into the scenarios in order.

Now, I will add a new Proto file named “expense.proto” under the folder “Protos” which will contain all RPC methods needed to generate the gRPC server stubs, request inputs, and response outputs for the methods, add the file and paste the content below:

What I’ve done here is straightforward, this Proto file exposes 3 RPC methods as the following

Step 3: Generate gRPC service stubs based on the Proto file

To enable this, we need to add this new Proto file to the gRPC service project, so open the project file “Expenses.Grpc.Server.csproj” and paste the below code:

You can remove any default Proto files coming with the default template. Notice how I set the “GrpcServices” property to the value of a “Server” as we are generating server stubs now.

Once added, build the project, and it should generate the code of server stubs for you.

To keep things simple, I will use a static list to store expenses and manipulate them, we will use the same repository in the next post in scenario 3 once we create the gRPC service implementation in a different way. To create the repository add a new interface named “IExpensesRepo.cs” under a new folder named “Services” and paste the code below:

What I’ve done here is simple, it is a service that exposes three methods responsible to list expenses by expense owner, getting a single expense by Id, and adding a new expense and storing it in the static list.

Step 5: Implement the Service based on generated gRPC service stubs

Now I will add the actual implementation of the Expenses Service by inheriting it from the auto-generated stubs. To do so add a new file named “ExpenseService.cs” under the folder named “Services” and paste the code below:

Now we need to add the “ExpensesService” gRPC service to the routing pipeline so clients can access the three methods, and we need the repository “IExpensesRepo” as a singleton service so it is injected into the “ExpensesService” service constructor, to do so, open the file “Program.cs” and paste the code below:

In order to call a gRPC service, any gRPC-enabled client tooling should have access to the Protobuf contract of the service (.proto) file before being able to invoke the gRPC service, to simplify this, we can enable gRPC reflection on the server, so tools such as PostMan (I’m going to use it for testing next step) will use reflection to automatically discover service contracts. Once gRPC reflection is enabled on the gRPC server; it adds a new gRPC service to the app that clients can call to discover services.

To do so, add a reference for the NuGet package “Grpc.AspNetCore.Server.Reflection” and then open the file “Program.cs” and add the highlighted lines below:

With those changes in place, client apps that support gRPC reflection can call the reflection service to discover services hosted by the server. It is worth noting that when reflection is enabled, it only enables service discovery and doesn’t bypass server-side security.

To start testing the gRPC service locally, run the project “Expenses.Grpc.Server” using dotnet run or from Visual Studio using Kestrel. Take note of the https port as shown I’m the image below:

If all is configured successfully, you should receive back the created expense with an “Id” property assigned to it, it should look like the below image: 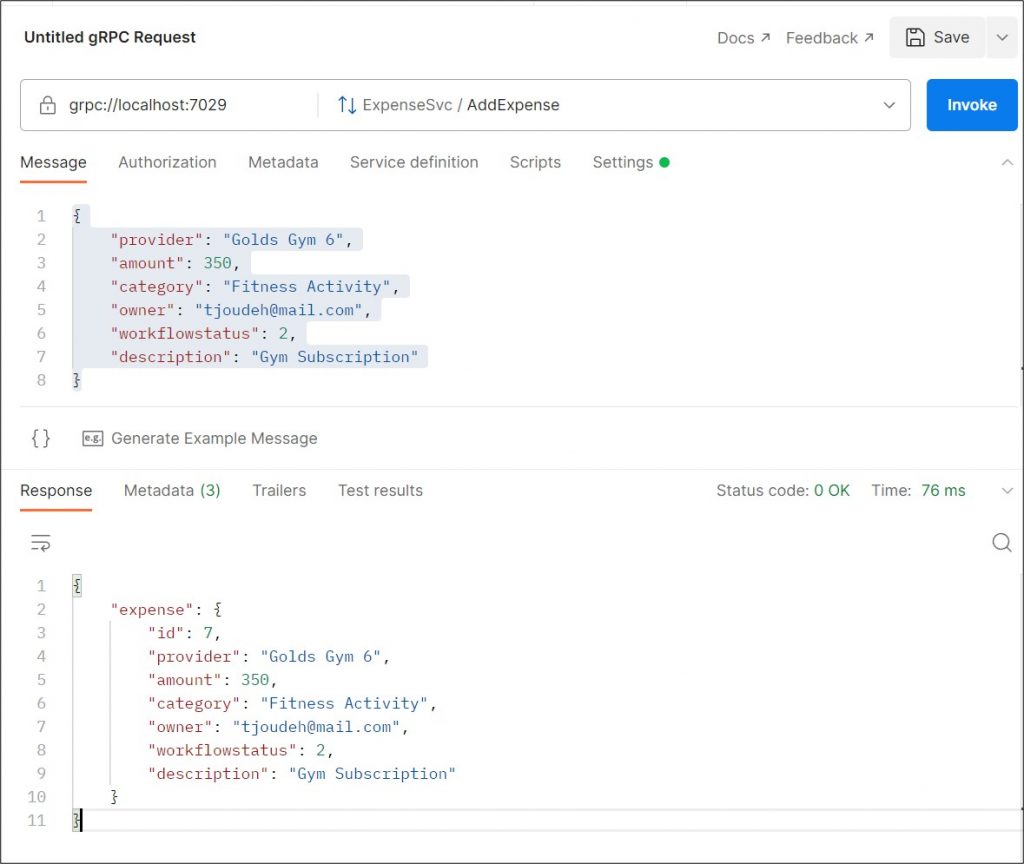 Now I will add a new Minimal Web Api which will act as a gRPC client for the gRPC service and will define three REST API endpoints to access the gRPC methods, using VS Code or Visual Studio 2022, create a new project named “Expenses.Grpc.API” of the type “ASP.NET Core Web Api”, do not forget to uncheck “Use Controllers” and “Configure for HTTPS”. If you are using VS Code you can create the project by running dotnet new webapi -minimal -o Expense.Grpc.Api --no-https This will create a new minimal Web API.

Next, I’ll add a link reference to the “expense.proto” protobuf file so the gRPC client application will be able to automatically generate gRPC client code to invoke the gRPC service, thanks for the built-in .NET integration between MSBuild and the Grpc.Tools NuGet package

Open the file “Expenses.Grpc.Api.csproj” and add the code below:

Notice that I set the “GrpcServices” property value to “Client”, this will tell the gRPC client when building it to generate concrete client types based on the “expense.proto” file definition. The generated gRPC client code will contain “client” methods that translate to the gRPC service I’ve built in the previous steps.

Because I’m using minimal API, all services configuration and API endpoints will be on the same file “Program.cs”, so I will list the entire code of the file and explain what I’ve done thoroughly, open the file “Program.cs” and paste the code below:

Step 5: Test the gRPC client and the gRPC server locally

With those changes in place, I can run both the gRPC server and the client and test locally to do so, run the gRPC server first by calling dotnet run and then the gRPC client using the same command. I’ll be using PostMan to send a regular HTTP request to the client API to one of the endpoints, for example, I will send a POST request to the endpoint “/api/expenses”, the request will look like the below:

Once you send the request, the endpoint should return 201 created and you should see logs reported on the gRPC server to indicate that the request from gRPC client reached the gRPC server and a new expense has been created, logs should be similar to the below image:

We are ready now to deploy both applications to Azure Container Apps and do an end-to-end test.

Step 1: Add Dockerfile to the gRPC server and client

In order to deploy both applications into a container we need to add Docker files for both apps, so ensure you are on the root of the project “Expenses.Grpc.Server” and add a file named “Docekrfile” and paste the code below:

Do the same for the project “Expenses.Grpc.Api” and add a file named “Docekrfile” and paste the code below:

You can use the tooling coming with Visual Studio or VS Code (Docker Extension should be installed) to generate the Docker files for you.

Step 2: Build and Push Container Images to a Container Registry

To deploy an Azure Container App, we need to have a Container Apps Environment to host it, you can follow this post to see how to create an environment.

Notice that I’m setting the “Transport” value here to “http2” as this is needed when the deployed container is exposing gRPC methods. I can set the “Ingress” property to “Internal” to allow only the container apps deployed within the same environment to call the gRPC server (similar to our case) but I kept it “external” as I want to test the gRPC server from PostMan as the next step.

Similar to what I’ve done previously when testing gRPC server locally, I will take the FQDN of the gRPC server and follow the exact steps done in step 8 earlier, if all is working correctly, you should be able to invoke the gRPC service using service reflection successfully, for example, to create create an expense, PostMan results will look like the below: 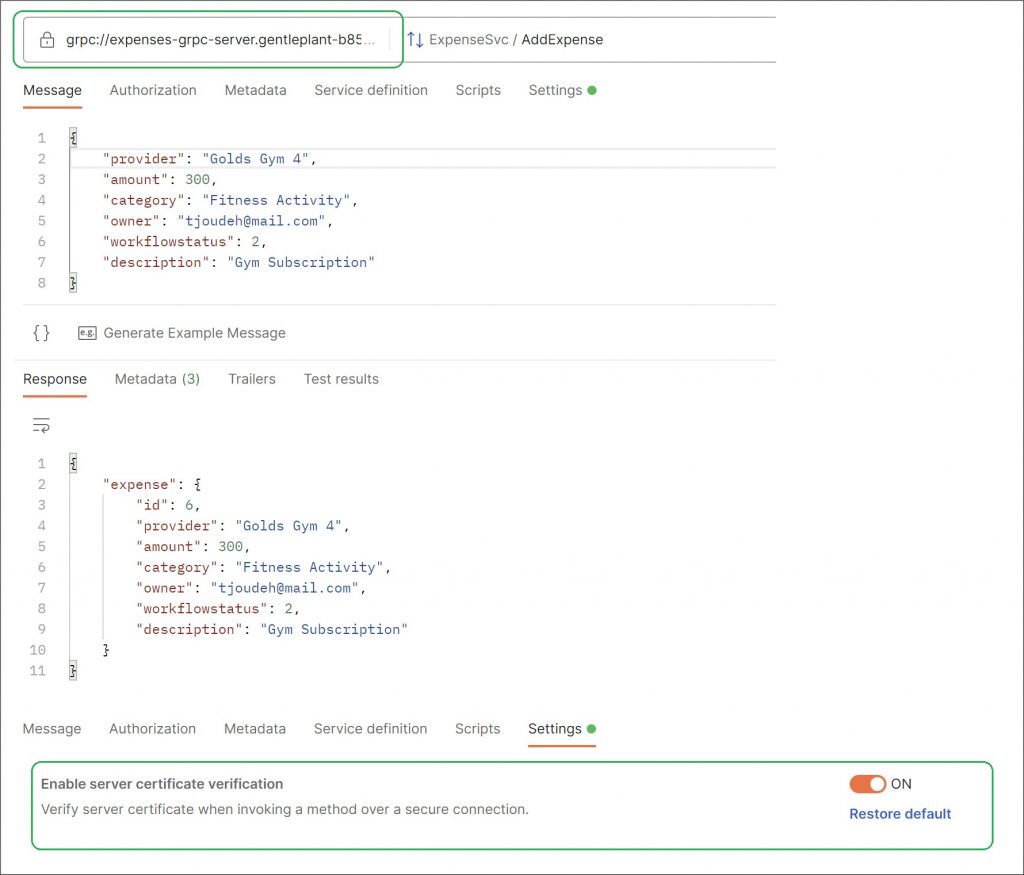 Notice that I’m keeping the transport to HTTP here as this is a normal Web API that will invoke the gRPC server. As well I’m setting the environment variables to the address of the gRPC service.

With this in place, we can do our final testing via PostMan or any other REST client, take note of your gRPC client API Container App FQDN and invoke the POST operation to create a new expense, PostMan result should look like the below: 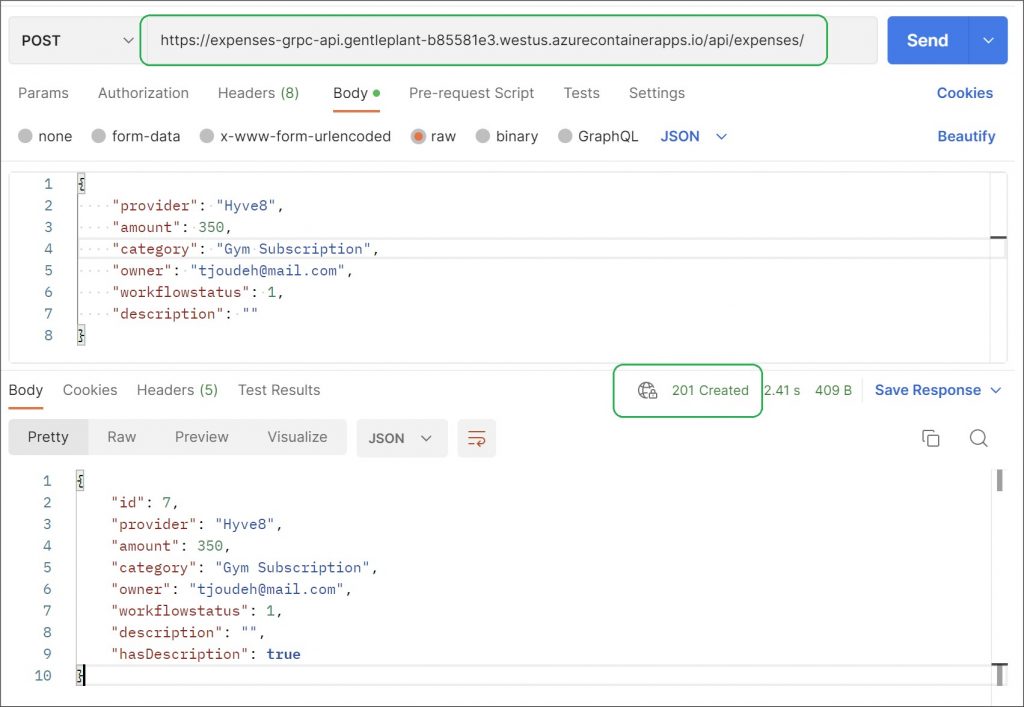 In the next post, I’ll be covering how to invoke gRPC services via Dapr Sidecar using GrpcClient and DaprClient (Dapr Client SDK).